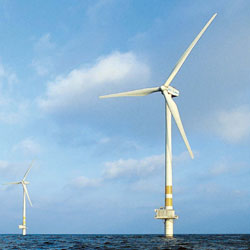 The University of Massachusetts Amherst has received a $3.2-million grant from the National Science Foundation Integrative Graduate Education and Research Traineeship (IGERT) program to start an interdisciplinary graduate program in Offshore Wind Energy Engineering, Environmental Science, and Policy. The new graduate program, whose Principal Investigator is Professor Erin Baker of the Mechanical and Industrial Engineering Department, will train 24 doctoral students over the course of five years in the technology, environmental implications, and social/economic/regulatory challenges of offshore wind farms. The IGERT grant will support each Ph.D. student for two or three years. The multidisciplinary program will feature 20 faculty members from nine UMass Amherst departments in the College of Engineering, College of Natural Sciences, School of Management, and College of Social and Behavioral Sciences. The Department of Energy’s National Renewable Energy Laboratory estimates that winds within 50 nautical miles of the U.S. coast have the potential to generate an average power of approximately 1,000 gigawatts, or more than twice the 436 gigawatts that was the average electricity consumption of the United States in 2005. The problem is that proposed offshore wind farms have often met with stiff public opposition. “In general, it has been surprisingly hard to site wind farms,” explains Baker. “Although they’re a clean and economical alternative to fossil and nuclear energy, there has often been a public backlash against them. We’re trying to address that in a way that faces this public acceptance problem right from the beginning.” The prime example is the decade-long delay in starting the Cape Wind project between Cape Cod and Nantucket, the first offshore wind farm proposed in the U.S. The public debate over Cape Wind has been long and heated. As Baker’s IGERT proposal notes, that example “underscores the critical need for an integrated, cohesive, multidisciplinary approach to offshore wind energy development that achieves technical excellence while reaching out to the public early in the process.” “That’s one of our main focuses,” says Baker about the new IGERT graduate program. “Engineers go out, and they find a convenient site for a wind farm and come up with a good engineering design that will maximize profits. Then they basically spring it on the public. That just doesn’t work.” The IGERT program at UMass Amherst will create a community of researchers who will understand the technological challenges, the environmental implications, and the social/economic/regulatory challenges of offshore wind farms. Then this new generation of offshore wind-energy experts will be willing to work with the stakeholders and public in an environment of “participatory communication,” as the proposal puts it. “We’re concentrating on offshore wind energy,” notes Matthew Lackner of the Mechanical and Industrial Engineering Department, “because, for most of the Northeast and other coastal population centers, offshore is really the only alternative. There is not enough room for large-scale onshore wind farms.” Lackner was instrumental in writing the IGERT proposal and is an expert in offshore wind technology. The UMass Amherst Wind Energy Center (WEC) is the anchor for this whole graduate program, which will take advantage of the center’s long history of assisting town officials in Hull, Massachusetts, while they planned and installed two onshore wind turbines now operating there. The WEC conducted feasibility studies for those turbines and is currently helping Hull develop an offshore wind energy facility, which will serve as a key case study for the new graduate wind program. The Hull project is a unique opportunity for students to participate in the technical assessment and planning of the wind farm, the environmental impact assessment, and the policy, regulatory, and outreach process. The IGERT program will also be assisted by the Northeast Alliance for Graduate Education and the Professoriate, one of 26 NSF-funded Alliances for Graduate Education and the Professoriate programs in the country. The three co-principal investigators for the IGERT graduate program are: Curtice Griffin, Environmental Conservation Department; Elisabeth Hamin, Landscape Architecture and Regional Planning Department; and Jon McGowan, Mechanical and Industrial Engineering Department. (August 2011)