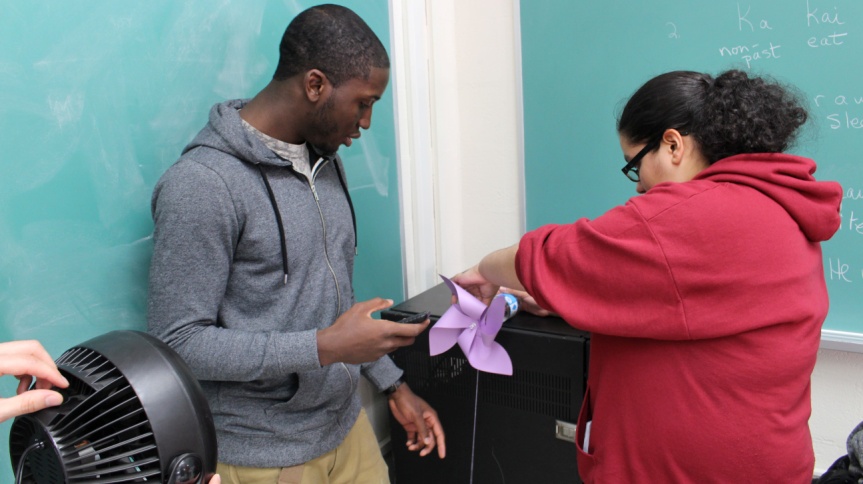 Each fifty-minute session brought groups of 8-10 students and visiting parents from as far as North Adams and Lowell, MA. All of the participants took part in an introductory turbine demonstration and then were able to learn, hands-on, how a wind turbine transforms wind into mechanical energy, and eventually, into electrical energy.

Students split off into small teams and, assisted by the IGERT Fellows, built their own nacelles from a pencil and a water bottle and blades out of construction paper. They were then able to test their creations in a makeshift “wind tunnel” using an electric fan. They also measured their turbine’s power using a weighted string taped to the nacelle. But students first had to apply some basic physics principles, calculating the weight of their load and the maximum distance of the attached string.

The faster the blades spun in the wind tunnel, the faster the string was reeled in, and the more power the turbine was capable of. Using their calculated values for the turbine’s potential work and the average reeling-in time for their turbine, students were able to calculate the overall power, in Watts, of their turbines. The groups’ respective turbines generated from three to eight Watts of energy, all of which would be enough to power a small lightbulb! 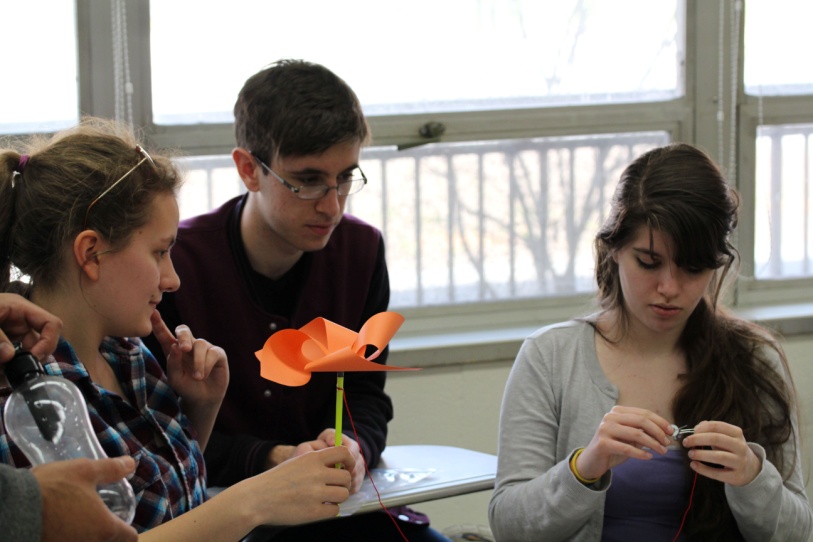 The wind energy mini-courses helped students not only engage with the engineering properties of wind energy, but grapple with some of the broader topics related to wind energy. Students were encouraged to ask questions and think more broadly about the applicability of wind energy in their own lives. There was also room for a lively discussion of the pros and cons of wind energy, as well as the history of terrestrial and offshore turbines in the United States and Europe. The interdisciplinary nature of the IGERT researchers present at the event made it possible for students to hear different perspectives on wind energy from an ecologist, a social scientist, and an engineer. In one instance, a parent brought up the “technical feasibility” of offshore wind energy. The discussion turned to the importance of good siting, which should account for public perceptions, as well as a number of other technical and environmental considerations.